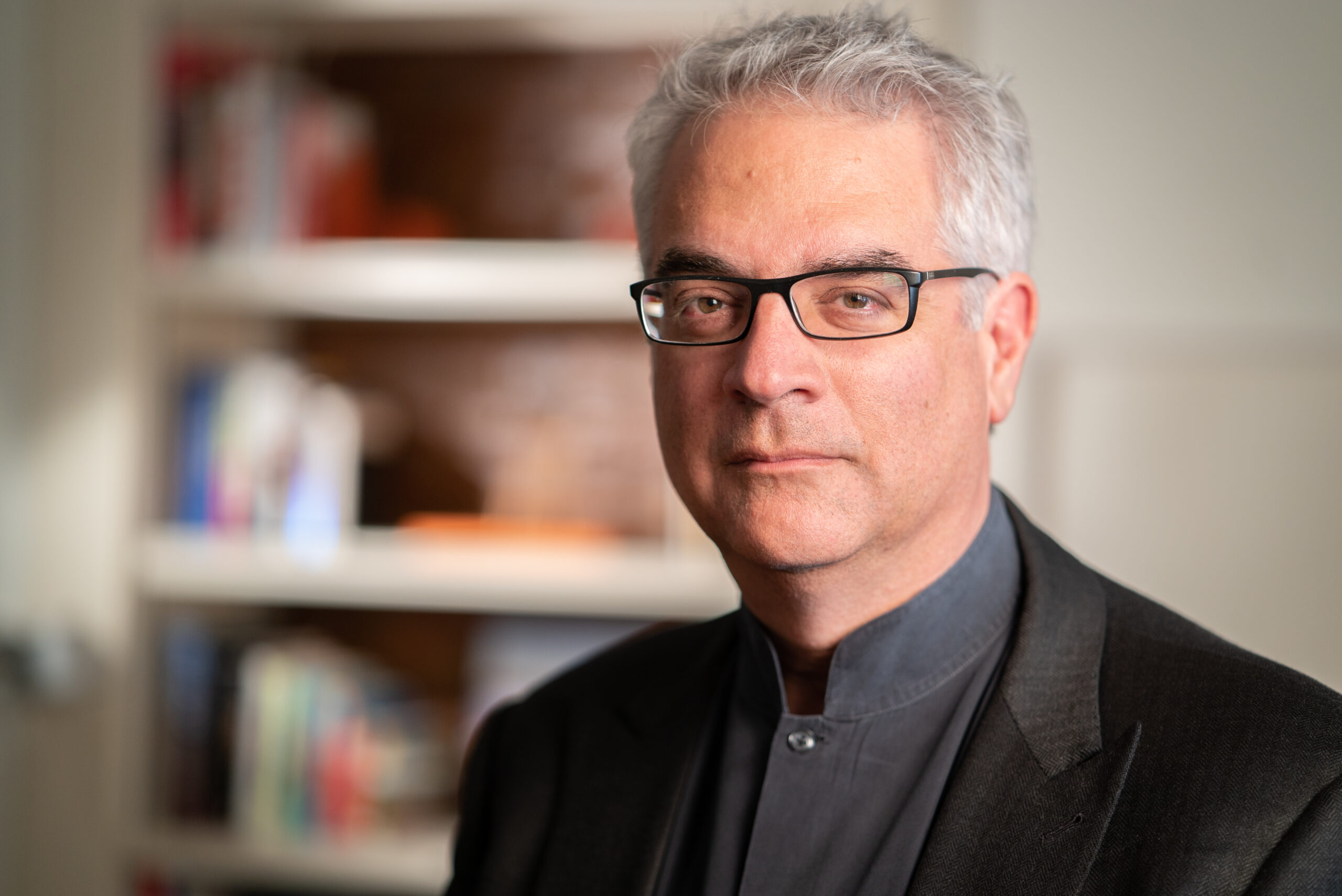 Nicholas A. Christakis, MD, PhD, MPH, is a social scientist and physician at Yale University who conducts research in the fields of network science, biosocial science, and behavior genetics. His current work focuses on how human biology and health are affected by social interactions and social networks. He directs the Human Nature Lab and is the co-director of the Yale Institute for Network Science.

Christakis recently sat down with our Executive Director, Ryan Stowers.

CKF Executive Director Ryan Stowers: You have a unique academic background. How did you bring together all of these disparate disciplines?

I work at the intersection of the biological, social, and computational sciences. My Human Nature Lab runs the gamut from the evolutionary biology of human social interaction to field trials in the developing world of public health interventions to social robotics. We work on social networks and social contagion and group functioning, all of which we study using mathematical and statistical approaches, as well as experiments.

I’m also interested in public health. I’m a physician, but rather than putting my finger in the dike and blocking one hole at a time, with one patient at a time, I hope to be able to prevent the emergence of illness and address the needs of larger groups of people. Therefore, we consider collective, population-based social science approaches to health problems.

Talk about your view about how evolution has contributed to, as you put it, the Good Society.

As humans, we certainly have the capacity for evil, violence, selfishness, and tribalism. But we also have these wonderful capacities for love, friendship, cooperation, and teaching. I argue that those latter capacities must necessarily have outweighed the forces of evil. It’s safe to say that if every time I came near you, you were violent towards me or stole from me or lied to me, I would be better off living apart from you. We would have evolved to be atomistic and to not live socially. Therefore, the benefits of a connected life must have outweighed the costs.

For far too long, in my view, science has been obsessed with the dark side of human nature. But there are good qualities that also require our attention. So part of my effort is to redirect our attention toward those qualities and their role in shaping us as a species and in their inevitable role in our social lives, even in modernity.

What concerns you about universities today?

I see universities as special institutions worth preserving and defending. And I have become very concerned about the state of universities and the public perception of them. Universities are drivers of our wealth and power in a very substantial way. The evidence is overwhelming that the kind of discoveries and the research that takes place at universities are crucial to our society and ultimately are translated into innovations in everything from energy to security to pharmaceuticals. Universities are a hallmark of our civilization. They reflect our commitment to openness and a search for knowledge. And, ideally, they reflect our deepest values.

Talk to us about those values.

The values include commitments to open discourse, to free expression, to rigorous debate, to reason, to empiricism. There are a number of principles universities are supposed to instantiate, and which have served them well, certainly over the last century. These principles cohere with our fundamental principles as a nation. People from all over the world come to study at our universities. Our universities are the envy of the world. In my view, they deserve tremendous care. And the reason U.S. tax dollars flow to universities and that philanthropists give money to them is so that universities can fulfill a duty they owe to the citizenry — the preservation, production, and dissemination of knowledge.

On Sam Harris’ Making Sense podcast in 2017, you talked about our common humanity. And you’ve said we are wired for goodness. Do you remain optimistic that we can continue to see value in one another?

Yes. First, there is a scientific aspect to that question, and then there’s a kind of philosophical, maybe even political aspect. For centuries, there have been two basic ways of approaching scientific questions. Darwin encapsulated these in what he called “lumpers” and “splitters.” Lumpers are people who group things together — these rocks are alike, these clouds are alike, these plants or these animals are alike. Splitters are people who make distinctions. This type of star is different than that type of star or this animal is not the same species as that animal, for example. Both ways of looking at things are valuable because both are an attempt to get a sense of the general principles that characterize the natural world.

In the social sciences, you can see this tension. For instance, in the field of anthropology, this relates to the search for cultural universals. Lumpers ask, can we say something that is generic about all human societies? But for splitters, every society is distinct, and culture cannot be reduced to general principles.

This distinction also applies in the study of human genetics. What can we say about human beings in general? How did our species evolve with particular capacities? That was the subject of my book, Blueprint: The Evolutionary Origins of a Good Society. The book is very much in the lumper category. It says there are some fundamental principles that organize human societies that natural selection has shaped, that are common to all societies, and that are actually good.

In your latest book, Apollo’s Arrow, you discuss how COVID-19 has led to massive changes. From your perspective, what are the most transformational shifts you’re seeing in higher ed as a result of the pandemic, or more generally?

The pandemic may have a number of effects on the value proposition of higher education, and it’s going to have some effect on the mechanics of pedagogy. It may affect some of the economics of universities, and, at the outset of the pandemic, we saw some of the smaller universities go out of business because they were so reliant on tuition. But I don’t think that universities are going to go away, certainly not because of the pandemic.

There are other forces that are reshaping the higher education landscape, including free speech problems on university campuses. There is also the rise of a bureaucratic class at American universities where a lot of jobs (not faculty jobs) are taking the place of public sector positions. People in the academic bureaucratic class can draw a good paycheck and not necessarily do much work, and they are certainly not advancing the primary mission of a university. These are forces that may be more important in shaping the future of education than the pandemic.

In a recent Big Think interview you talked about how disagreement can lead to innovation and progress. Can you elaborate?

One of the reasons I try to acquire knowledge in as many fields as I can is that a person can get this kind of kismet, a sudden discovery of an idea from one field that’s highly relevant to another. Science is replete with such examples. Creativity comes from tension and from the intersection of disparate ideas, which results in new knowledge.

This is a very deep and fundamental principle that I think applies equally to our political lives. I think of political leaders who cultivate a team of rivals, as did Abraham Lincoln, or the examples of ancient emperors and kings who sometimes deliberately created courts that avoided groupthink. These leaders did not want everyone to tell them what they wanted to hear, but rather cultivated argument and even rewarded people who argued against a favored position. I think that’s very valuable politically and certainly it is valuable in my laboratory.

So, the opposite approach doesn’t help us solve big problem, right?

Right. As scientists, we are fighting, in a sense, against nature and trying to understand its mysteries. When we do that, if we are serious about getting to the truth, we want to challenge each other. I think creating that kind of culture is crucial. There is this particular friend of mine whom I talked about in the Big Think piece. This is someone I really like and I agree with on maybe 20 or 30 percent of topics we discuss. But those topics are boring to talk about. If we disagree about something, we can argue for an hour and, typically, it’s fun. In fact, the fact that we disagree about some things make our agreement about others all the more enjoyable. But, more importantly, this is how you learn something.

I’m also partial to the notion that you criticize a person’s ideas, not the person. It’s lazy to criticize the person. The point is this: the author of an idea is less interesting to me than the idea, which, incidentally is an argument that writer James Baldwin made particularly eloquently, saying that “I want to ally myself with the truth.” Observations and ideas are true or false. They rise or fall according to their merits, not according to the moral worth of the people who articulate them. I think we’re at a moment in our society right now where that pendulum has swung a little bit too much to the person. The maker becomes more important than the object. To be clear, I’m interested in the makers. I’m interested in Rothko; but I’m much more interested Rothko’s paintings, for example.

This viewpoint is part of an ongoing series, Driving Discovery. In this series we amplify the voices of a diverse group of scholars, nonprofit leaders, and advocates who offer unique perspectives on how openness drives human progress.