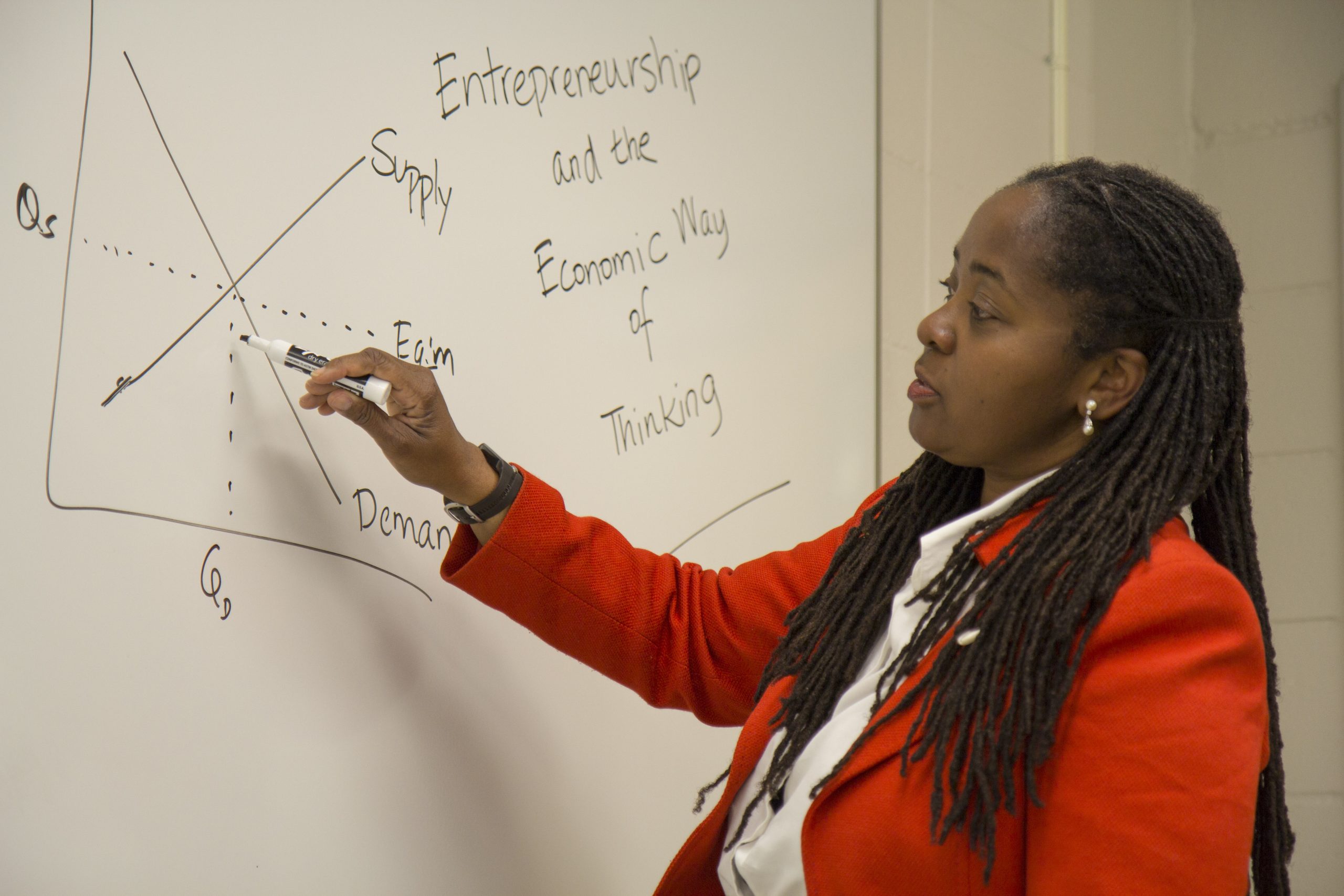 Kathaleena Monds: The Importance of People

For Kathaleena Edward Monds, the dates remain important. May 14, 1982. That’s when she graduated from high school. Then came May 28, 1982. On that day, she and her family were evicted from the home where they’d lived since Monds was four. “My mother was a domestic worker—she cleaned homes of wealthy Caucasian families in Michigan—and my father, a Belizean, was an upholsterer,” she says. “My entire K–12 life, our family was on welfare and I was often embarrassed about it.” That may be why Monds has devoted her career to helping others build businesses: She is a professor and co-director of the Center for Economic Education/Small and Minority Entrepreneurship at Albany State University. Monds shares lessons from her life and her career in computer science and academia.

What was your childhood like?
I grew up the youngest child of seven, in a modest, working community on the West Side of Detroit. I attended public school, and my family emphasized the importance of hard work and community. People are the most essential element in life. I met my best friend while only 4 years old, and we have remained friends for more than 49 years.

Did you have any plans after attending college?
I had no idea what I wanted to do. In fact, in high school, my goal was to become an executive secretary or a court reporter. A mentor who worked at Burroughs Corporation (now Unisys) encouraged me to major in computer science, so I did. It was a good fit for me: I loved problem-solving and analytical tasks. Attending Spelman College, an all-female, private college, provided me with the atmosphere to develop my self-confidence and belief that women could be computer scientists. It empowered me to find my greatest joy.

How did you decide that computer science was the right career?
A Burroughs/Unisys programmer asked me to type COBOL code. Because of my level of typing proficiency and accuracy, she thought I had the prerequisite skills to become an excellent programmer. Over the years, I have taught information systems, and I’m now working to inspire students to be innovative and to use their creativity skills in the marketplace of ideas.

What about you most surprises people?
That I have reinvented myself over the years. I returned to graduate school after I turned 50 to pursue another degree in economics and entrepreneurship because I wanted to learn something new. I vividly remember receiving my Ph.D. in 1994 and saying that I would never, ever, ever return to “formal” college. But I became interested in entrepreneurship and enrolled in the University of Delaware’s Economics and Entrepreneurship for Educators program in 2013. Most people are surprised that I have held only three jobs and two careers in my professional life. I worked at Burroughs/Unisys (14 years), then Grambling State University (three years), then Albany State University (18 years). People are also surprised that I home birthed and home schooled all four of my children.

What did you learn from your first job?
My first job was ironing shirts for my older brother who was working. I learned that quality is essential and that it is always important to deliver my best work. I also learned that I was willing to work hard, no matter how much money I earned. Another early job was helping my brothers fold the Detroit News and Detroit Free Press in preparation for their paper routes early, early, early in the morning. They taught me about the importance of folding the papers tight to ensure that they did not unfold when tossed on a customer’s porch. Attention to detail was an important lesson, and I also learned about the importance of getting to bed early so that I could rise early.

What advice would you give to your 20-something self?
Take more risks. Fail often, and fast. Be courageous. Be confident. Find ways to create the greatest value for yourself and others. Be mindful. Practice living in the moment.

What advice would you give to other 20-somethings?
People matter. Embrace relationships with humility and learn from others to improve your own life. Share your skills so that everyone is better off. Community service is an excellent lesson that teaches us gratitude and patience. Learn your history and the history and struggles of others.

What book has most influenced you?
One book that changed my life was The Bondwoman’s Narrative: A Novel by Hannah Crafts, edited by Henry Louis Gates, Jr. It’s a historical recollection of the day-to-day life of Hannah Crafts, a slave in the 1850s who yearned for freedom. The book is the only known novel written by a female slave. It changed my life because it provided details of her life, in her own words, and how she persevered. The book also helped me understand that the challenges African-American women faced then parallel some of the struggles today—not being considered “enough”; feeling as though the African-American man were absent; identifying ways to build the momentum to survive against the odds.

What are you reading now?
I am reading Be Free or Die: The Amazing Story of Robert Smalls’ Escape from Slavery to Union Hero by Cate Lineberry and The Adventures of Jonathan Gullible by Ken Schoolland.

Something about you that people find surprising?
That I performed in the Thomasville (Georgia) On Stage and Company’s 2014 production of “A Raisin in the Sun” in the role of Ruth Younger, wife of Walter Lee Younger.

A quote that you go back to again and again for inspiration?
“The race is not given to the swift, nor to the strong, but to those that endure to the end.”