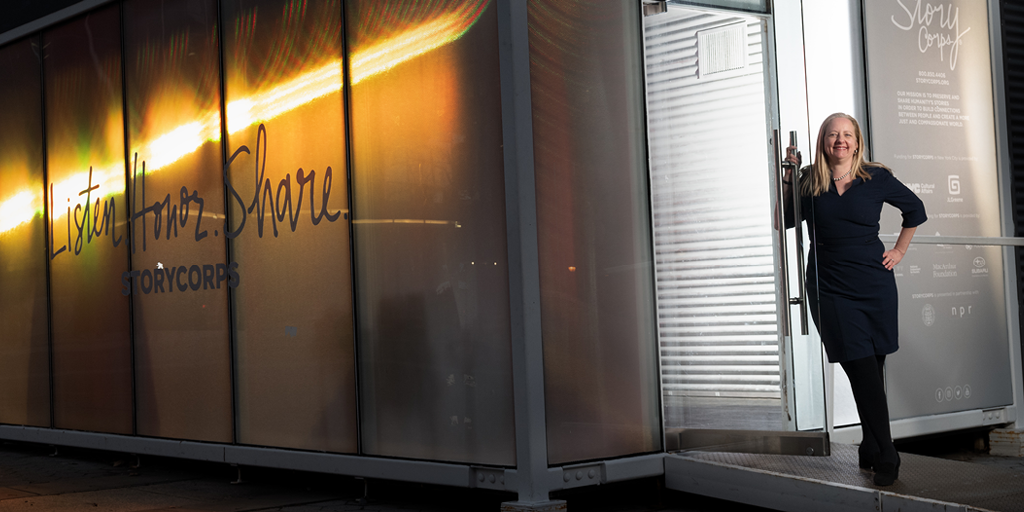 Across the Great Divide

StoryCorps shows how we can “lower the volume” on conversations between people of different views.

When StoryCorps opened its first listening booth in Grand Central Station 15 years ago in October, Studs Terkel was there to cut the ribbon. The late, great Chicago journalist, best remembered for his collections of oral histories in which average Americans discussed topics such as Working and Race, was the spiritual godfather of StoryCorps, whose mission has been to get regular people talking to each other. Terkel knew something about the alternative: in 1953, at the height of McCarthyism, ABC cancelled his popular TV talk show, Studs’ Place, under pressure from the FBI.

At the StoryCorps’ opening, the then 91-year-old interviewer said, “We know who the architect of Grand Central was, but who laid these floors? Who built these walls? These are the voices you must celebrate through StoryCorps!”

“Studs believed in the power of the stories of everyday people,” says StoryCorps CEO Robin Sparkman.  “We always say that nobody comes to StoryCorps to get rich or famous. We really run from celebrities here.”

That last sentiment would be refreshing enough. In the decade and a half since founder Dave Isay first realized his dream of getting two people—family members, friends or colleagues—in a soundproof booth with a trained facilitator to record a 40-minute conversation, nearly half a million ordinary people have participated in StoryCorps, talking and, most importantly, listening to each other. (Countless more have listened to excerpts from these talks as part of a regular feature on NPR’s Morning Edition.) But now the group is expanding its mission, getting people, sometimes strangers, of explicitly differing cultural or political views talking to each other.

The idea for the One Small Step initiative came to Isay and Sparkman during the run-up to the 2016 election. “Both Dave and I have kids and we both didn’t want our kids to watch the debates,” says Sparkman, 49. “We were concerned about the level of discourse and the ways the candidates were presenting themselves.  We both were disheartened and surprised. We thought that StoryCorps could play a role in trying to lower the volume.”

In the first conversation in the program, recorded before the presidential election and available in animated form, liberal Jenn Stanley confronts her conservative father, Peter, saying, “You used to like me, and I don’t necessarily feel that you like me anymore.”

With emotion Jenn responds: “I think as I got older, I just realized you were wrong about a lot of things.”

“The important thing in our relationship is that you have your own beliefs, and I respect you for your beliefs,” says Peter. “You were raised to be a sensitive, caring person and that’s exactly who you are… When my time comes, if you can say, ‘My father was a good man,’ then I’ll be happy.”

Get out the handkerchiefs.

One thing you will not hear in the One Small Step conversations (excerpts of which will be animated and made available on storycorps.org) are words like Trump, Pelosi, Democrat, or Republican.

Sparkman came to StoryCorps from journalism (she’d been a reporter at Newsweek, and then editor of American Lawyer) in 2014. “When I turned 40 and my kids were able to brush their own teeth,” she says, “I started to think about what else I wanted to do with my life.”

All StoryCorps interviews are archived and available to the public at the Library of Congress’s American Folklife Center in Washington, DC; selected interviews are edited down to featured on their website and others are selected for animation. StoryCorps is now working on making its archives public and accessible at their site. The conversations will be searchable by topic, as they are at the Library of Congress.

“We see this as an extraordinary gift for humanity,” says Sparkman.  “Journalists, academics and historians will be able to listen to people talk about the gay marriage decision, for instance—what was it like, what did it mean to them.”

Today, StoryCorps has three permanent booths in Atlanta, Chicago and New York, as well as a mobile recording booth that is currently traveling through the South. They reserve half of their recording spots for the voices of what they deem underrepresented or marginalized groups (African-American, Latino, LGBTQ) and for the last several years they have sponsored Initiatives meant to draw from particular groups: veterans of the Iraq and Afghanistan wars, families who lost someone on 9/11, people affected by incarceration.

For the One Small Step initiative, StoryCorps will employ its app, its stationary booths and its MobileBooth, custom-fitted inside an Airstream trailer, as it criss-crosses the country.  The conversations recorded so far have crossed different kinds of lines.  Cheraton Love, a liberal African-American woman, used the StoryCorps app to record a talk with her white, conservative father-in-law, Jim White, at his home in Silver Valley, North Carolina.  The two talked about their hopes and fears for their country, the planet and their kids and grandkids.

Reflecting on the South’s Jim Crow past, White says, “If we lived in the circumstances from years ago, or the way things were years ago, we would probably never know each other. There were some things that I thought as a young man that would have never allowed us to even have a conversation. But I thank God that He gave me the knowledge to understand what love really means.”

Sparkman envisions conversations between strangers, recorded in the MobileBooth via satellite: get a Muslim grandmother from Dearborn, Michigan talking to a Jewish bubbe on the Upper West Side of Manhattan.  “We can all learn from hearing someone else’s story,” she says.  “The question is: Are you open to it?”