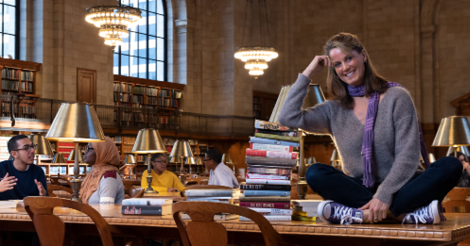 It’s easy to tell that Mary Slone is a beloved teacher and veteran debating team coach at her high school in the small Appalachian town of Eastern, Kentucky. To wit: She’s quick to point out how effective and powerful the art of storytelling can be. Consider the Bible, according to Slone, which is filled with sages, kings, and prophets who nevertheless used simple stories and parables to convey profound messages. “We’re hardwired for stories and we’re hardwired to connect with one another,” Slone says.

Slone is one of the many participants in a rapidly growing global educational organization known as Narrative 4. (She’s participated in so many of its international events that, after taking the training to become a program facilitator, she has attained the rank of “ambassador.”) Narrative 4’s premise is simple: to use the power of storytelling to develop empathy and tolerance among people—mostly high school students—from vastly different socio-economic, geographical, and cultural backgrounds. The latest of Narrative 4’s student exchanges involve Slone’s students from Kentucky hosting their counterparts from University Heights High School in the Bronx, New York, at the end of October.

Narrative 4’s premise might be elegantly simple, but the project has become so popular in the six years since it was founded by veteran non-profit executive Lisa Consiglio and Ireland-based author Colum McCann that running its ever-expanding number of training events, symposia, and international student exchanges can be complex.

“We’re trying to revolutionize education,” Consiglio says. Before beginning Narrative 4, Consiglio was a long-time director of a non-profit center in Colorado. Through her work there, she met with authors and activists from around the world, helping her see the big picture—that a true understanding among people around the country and the world could best be developed when they’re younger—that motivated her to begin Narrative 4’s use of storytelling techniques with high school students.

The state of the state

She didn’t have to look far. In the white-capped mountains of Colorado, many migrant workers come from Mexico in search of jobs in the service industries that support the state’s posh ski resorts. Consiglio says she also noticed Russian workers angling for jobs on oil rigs up and down the Roaring Fork Valley who brought their families with them. Humans might be hardwired for stories and connecting with each other, as the debating coach Slone points out, but there wasn’t yet an entity that brought all of Colorado’s diverse population—especially the children of these workers—together to learn about each other and to foster tolerance and understanding.

One of the award-winning authors Consiglio had come to know during her time running the non-profit was Colum McCann, whose advocacy of what he calls “radical empathy” was a theme that resonated with her. “It’s hard to fire a bullet toward someone you’ve learned to love,” McCann says.

Inspired by this idea of “radical empathy,” Consiglio and her staff decided to use a theatrical technique where two people talk with each other about themselves and then each takes a turn acting out a narrative as if they were that person. The extraordinary “Aha!” moment occurs, says Consiglio, when a person listens to his own story being re-told in first person by his partner in the exercise.

Word of Narrative 4’s life-altering exchanges quickly reached beyond the Rockies. No sooner was Consiglio leaving Colorado that she met Chicago teacher Charles Miles from one of the city’s toughest schools, Crane High School. The school was at the center of the homicide capital of America—some 500 of Chicago’s residents were murdered in 2012. A typical day at Crane, Consiglio recalls, would see only 300 of its 1,200 students show up. If it were a sunny day, the number would drop to 200. A sunny day on a Friday? More like 100 in attendance. The sad fact was that if most of the students at Crane lived to the age of 18, they felt they had accomplished something.

In 2013, one of Narrative 4’s first exchange projects was arguably its most emotional and groundbreaking: Connected by Skype over the course of five days, Crane students paired up with students at Newtown High School in Connecticut, where a deranged young man gunned down children and teachers at nearby Sandy Hook Elementary School. What occurred, Miles said to Consiglio, was the emergence among students of “fearless hope through radical empathy,” a sentiment echoed by McCann in his books that have since been a guiding force in Narrative 4’s exchanges. The racial and socio-economic divides between the students of Crane, in urban Chicago, and Newtown, a leafy-green Connecticut suburb, were enormous, according to Consiglio.

But through the power of storytelling and walking in another person’s shoes, the transformational power of Narrative 4’s exceptional style began to blossom. Students wrote poetry to each other that expressed their aspirations. Peer-to-peer learning, not something that’s a standard part of any high school’s curriculum, strengthened by the day. The students came to understand that their problems were by no means dissimilar, says Consiglio. Most everyone proposed ways to make the exchange more than just five days. In just six years, Narrative 4 has forged bonds between students in Canada, Colombia, France, Germany, Ireland, Israel, Italy, Mexico, South Africa, Rwanda, Tanzania, the United Kingdom, and all across the United States

That’s not to say every time students participate in the exchanges that the stories they tell and hear are easy to digest. There are sometimes startling revelations (accompanied by lots of tears) when two young people discover that they have a lot more in common than they thought. Imagine both students learning that their parents battled drug addiction and abandoned them to be raised by their grandparents. “There’s something muscular about storytelling and the ability to understand someone who is very different from you,” says McCann, who says he’s proud of how the students learn to embrace nuance in a polarized world.

Speaking of muscular storytelling, consider one of the oldest stories ever told, which appears in one form or another in countless traditions and cultures: the Tower of Babel. When the “whole earth” enjoyed one language, people cooperated such that they planned to build a tower that could reach the heavens. But the ambitious project ended when they suddenly became confused because they were speaking many different languages. People “dispersed over the face of the earth” and the tower never got built. The point made by Slone, described by Consiglio as a Narrative 4 “rock star,” about the ancient—even biblical—nature of storytelling is on the mark as students are using the technique to build their own towers … modern-day towers of understanding, empathy, and tolerance that bring people of different languages and customs together.

“This is their world to change and their project,” McCann says about Narrative 4’s students and teachers, the most current of which are coming together in Slone’s town in Appalachia. It’s the first time these young leaders will meet each other face-to-face, after months of Skyping and other social media conversations. In March of 2019, the ten University Heights students in New York City and their teacher Lisa Greenbaum will host their new friends from rural Kentucky. “We’re hoping to continue to deepen those relationships, break down stereotypes, and inspire each other with the shared dream to make the world a better place,” says Greenbaum.

Get ready for The Bronx, New York meets Floyd County, Kentucky. Two weeks filled with stories focusing on the issues of immigration, identity, faith, violence, and the environment. “[All the students will experience] things they’ll like and don’t like,” says McCann. “But at the end of it all, they’ll walk out of there as better people. A ‘domino effect.’ Not just a two-school experiment but a model of further engagement.”