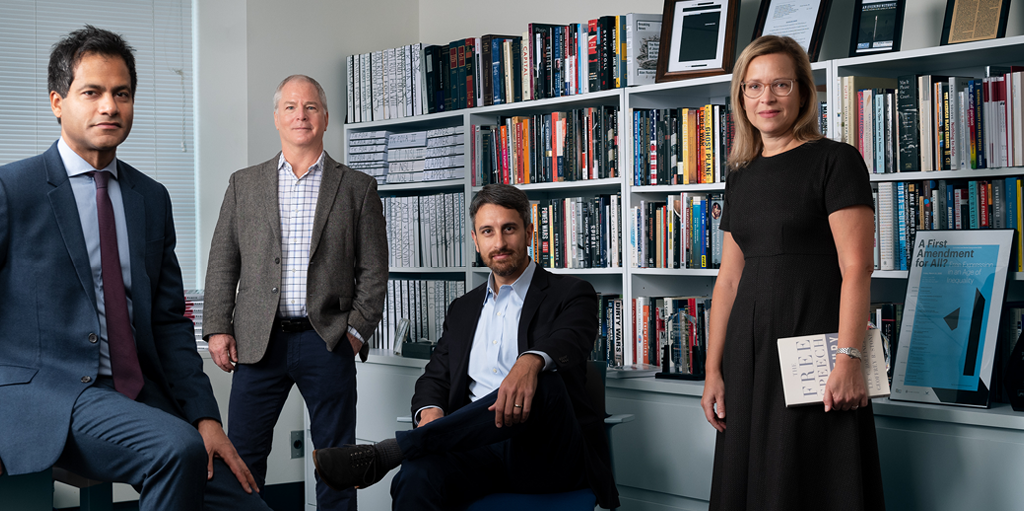 Anyone who’s taken even a cursory glance at the replies to the tweets of @realDonaldTrump knows that his Twitter followers aren’t all fans. “D stands for Democrat, R stands for Russia,” read one of the more printable comments beneath a recent tweet about the Mueller investigation, while others featured memes of the president as a witch, a piece of toast, and Putin’s, uh, poodle.

These jibes did not escape the notice of the 45th president, or whoever manages his account, and he retaliated by blocking some of his critics. A U.S. district judge ruled the action unconstitutional in May, rejecting contentions that “the First Amendment does not apply in this case and that the President’s personal First Amendment interests supersede those of plaintiffs.” The White House unblocked the followers, but immediately appealed.

The suit was brought on behalf of seven blocked Twitter users by the Knight First Amendment Institute at Columbia University. Established in the summer of 2016, the institute was the brainchild of Lee Bollinger, president of Columbia, and Alberto Ibargüen, head of the non-profit Knight Foundation, who shared concerns about threats to freedom of the press and freedom of speech in an age of proliferating digital surveillance.

“Part of our mandate is to think about the edge of technology, and the edge of the law,” says Jameel Jaffer, the former deputy legal director of the ACLU who is the inaugural director of the institute. “When we litigate we try to bring ‘impact cases,’ cases that have the potential to change government practice and policy and affect the rights of not just our own clients but people who are before the court.”

Threats to press freedoms occur no matter what technology journalists use or who’s in power, of course: “Issues of keeping sources confidential; the espionage act related to whistle-blowers; subpoenas directed at journalists for their sources; national security letters directed at compelling media organizations to reveal sources,” Jaffer says, off the top of his head.

But the election made the Knight Institute’s work more urgent. Many administrations have warred with the press; Trump has taken the rhetoric to a new level. The president had been in Missouri the day before our conversation, telling an audience at a VFW convention, “What you’re seeing and what you’re reading is not what’s happening.”

“There’s a difference between healthy skepticism toward the media and radical nihilism,” says Jaffer. “He routinely denies provable facts. More alarming, a larger sector of the public believes President Trump over provable facts. That is a threat to our ability to have conversations across political divides, and our ability to maintain the integrity of this political union. It’s one thing to have political disagreements; it’s another to have such divergent views of the actual universe.”

Jaffer does not see himself as partisan: At the ACLU, he spearheaded litigation that compelled the Obama Administration to disclose its “drone memos” as well as the Bush Administration to release its “torture memos,” and the Knight First Amendment Institute receives equal funding from the Charles Koch Foundation as well as non-profit organizations funded by eBay founder Pierre Omidyar, including Democracy Fund and First Look Media. What makes the institute’s work so compelling, and unique, is the uncharted territory before them.

Take the Twitter case. The president tried to argue that his was a personal account, meaning he could block anyone he pleased. “We made the argument that his Twitter account is a public forum under the First Amendment,” says Jaffer, “analogizing his Twitter account to more conventional town halls and city council meetings, and proposing that the same body of laws that apply to those kinds of meetings should be applied to his Twitter account.” While early critics thought it a controversial stand, the president’s habit of announcing personnel shifts and even new foreign policy by tweet only bolstered their argument. Which doesn’t mean the issue is settled.

“The kinds of questions we’re asking won’t be decided only by legal scholars,” says Jaffer. “These are questions the public at large ought to be debating.  How should we regulate social media? Is our complaint that Facebook is taking down too much material, or is it taking down too little?”

“Most of the regulatory solutions involve very difficult tradeoffs,” says Jaffer. “It’s awful that falsehoods spread so easily on Facebook, and some of those falsehoods have very real social costs. On the other hand, do we want Facebook to police its site for falsehoods? Do we trust them with that kind of power when Facebook is now, unfortunately, the closest thing we have to a public square?  Do we want Facebook deciding who gets to speak and who doesn’t? The hope is that collectively, and over time, we can come up with answers.”

When deciding which legal issues to address, Jaffer and his staff of 14 turn to the Knight Institute’s board, which includes Bollinger and Ibargüen, as well as Nicholas Lemann, former dean of the Columbia’s Graduate School of Journalism; Eve Burton, general counsel at Hearst Corporation; and Theodore Olsen, U.S. solicitor general under George W. Bush, among others. They look for cases they can win, naturally, but also for issues that get people’s attention. In that regard, they have plenty to choose from. “We’re doing some work around laptop searches at the border,” says Jaffer. Department of Homeland Security agents have asserted their right to search and even seize peoples’ laptops and cellphones when coming into the country. The ACLU and the Electronic Frontier Foundation sued the DHS in September of 2017, claiming the searches violated the First and Fourth Amendments; the Knight Institute has filed a Freedom of Information Act (FOIA) request to learn more about who the government is targeting, and why, noting the chilling effect such searches have on lawyers, doctors and journalists.

“I think this administration has expressed unprecedented contempt not just for the First Amendment but principles that ought to appeal to Americans across the political spectrum,” says Jaffer, “and that I think are crucial to the survival of democracy. If these democratic principles are eroded, then it’s all over. As somebody who lives in the United States, and New York City—I’m a Canadian myself but my partner’s American, my kids are American—it’s a scary time to be watching events unfold. That said, it’s a great time to launch a First Amendment organization!”