At a Small Midwest High School, Shop Class is Reborn

The Cardinal Manufacturing program teaches students skills like welding, machining, and woodworking, as well as accounting and office management. The result is a student-run, profit-sharing fabrication and repair business that has become so successful it now serves as a model for other school systems nationwide.

It isn’t hard to find bad news about young people these days. On the internet, on cable, in television commercials, the portrait of today’s youth is often of a lost and lonely mess, head bent over a smart phone wandering the wastelands of cyberspace. If that grim image leaves an older generation despairing, they would do well to meet Matte Hynek.

“Four years ago I was incredibly shy,” Matte says, which may be an understatement. Others remember her as so nervous she found it hard even to say hello to people. Since then, however, she has blossomed into a poised and confident young woman able to speak to audiences of hundreds of people. Says one acquaintance, “Matte has become a superstar.”

The transformation is due largely to Matte’s having graduated last year from Eleva-Strum High School in the small dairy farm community of Strum, Wisconsin—population 1,000—where a technically-oriented program is turning out smart, motivated, and mature young men and women who leave school with an early taste of the real world. The program, Cardinal Manufacturing (named for the school’s fine-feathered mascot), focuses on teaching students skills like welding, machining, woodworking, and design. It also teaches production management, accounting, marketing, and office management. The result is a student-run, profit-sharing fabrication and repair business that has become so successful it now serves as a model for other school systems nationwide—with Matte as one of its spokespersons.

The engine behind Cardinal Manufacturing is a technology education teacher named Craig Cegielski who came to the school district in 2005. As at thousands of school systems in America, “shop” class at Eleva-Strum High had become a casualty of the trend in recent decades to send most high schoolers to college. Shop departments became school storage rooms.

“When I came here the shop program was dead,” says Cegielski, who found a collection of old machinery languishing in a dusty work area that had once been the shop space. But, he says, student interest in tech-ed wasn’t dead at all. There was a hunger for it. He approached the Eleva-Strum school administration to ask their help reanimating shop for the 21st century. “We can’t try to teach these kids on 1960s equipment and expect them to go out and get jobs in a high-tech world,” he argued.

The school system agreed, and Cegielski set about turning a 10,000 square-foot floor area into a real workshop—on a $10,000 budget. “We had enough money for wood, glue, and sandpaper,” he says. But he charmed local industries into donating equipment and asked them to send his students work. Hundreds of townspeople came to an open house to tour the shop and devour hotdogs, soda, and donated custard. Cegielski brought his own tools to school for his classes to use.

The student-run business made money by taking on one-off fabricating and repair jobs that were too small for bigger manufacturing outfits to tackle. Today that’s still their bread and butter work. “We’ll fix broken stuff, reverse engineer it, design, and make a part. We’ll build you a grill, fix your trailer. We just fixed the railing for the church.”

In its first year, Cardinal Manufacturing made $11,000 doing jobs for town businesses and local farms. They bought more equipment and fed the rest of the money back into the business.

Today there are 21 juniors and seniors— out of a total high school enrollment of 170—who devote the last two periods of the school day to running the Cardinal business. (Lower classes work their way up to the “varsity” team beginning in middle school.) 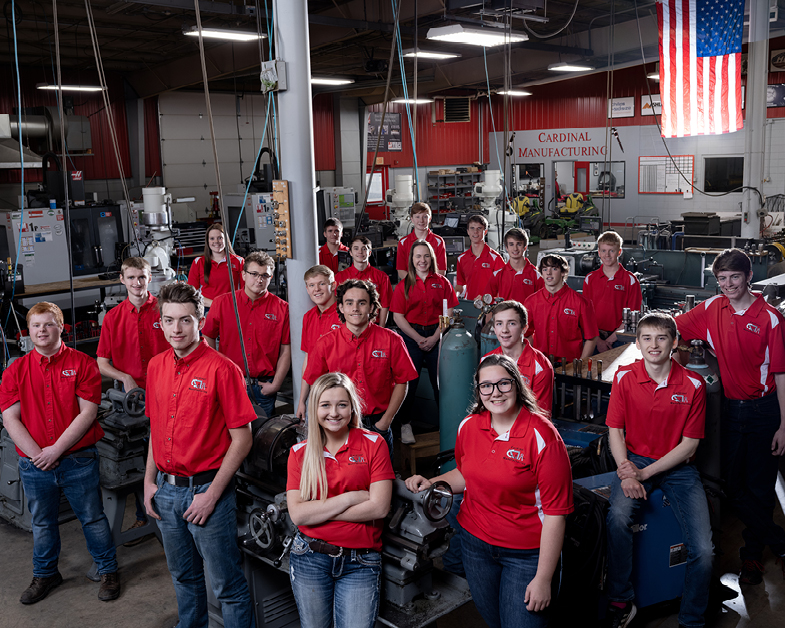 Cegielski—“Mr.C” as some kids call him—teaches his students to recognize the rhythm of work in their bodies, but he also seeks to instill the importance of confidence, self-respect, and character.  “When I ask potential employers to name the traits they look for most in an employee, they say: send me somebody who will show up on time, neatly dressed, with a positive attitude, hard-working, a flexible problem-solver.” Employers will take it from there.

“Those attributes are just as important as their technical skills,” Cegielski insists. “Shake hands, look people in the eye, earn their trust. Be a leader. When we go out to do a job in town, we each show up in a collared Cardinal Manufacturing work shirt—tucked in. If we aren’t the best they’ve seen, we aren’t doing well enough.” Such skills can cause a student to flourish in many ways, just as Matte Hynek has.

Matt Guse, president of MRS Machining in Augusta, Wisconsin, has eagerly hired graduates of Eleva-Strum High School. “I tell other employers: if you ever find yourself interviewing a potential employee out of the Cardinal program, your first words to them should be ‘when can you start?’”

Over the past twelve years Cardinal has turned out more than 100 graduates and grosses over $100,000 a year servicing upwards of 100 regular customers. Not long ago a University of Wisconsin graduate student conducted a business study of Cardinal and found that 72 percent of its graduates had found work in fields related to manufacturing.

Manufacturing has taken an economic hit in the Midwest lately—the Bureau of Labor Statistics expects a continued steady decline—but Cegeilski insists his students won’t have trouble transitioning into related fields: a well-trained welder or machinist might find work in the automotive field; good office managers are prized everywhere. Work life is not always a straight line.

Graduates of a program that began without feasibility studies or endless whiteboard meetings, without political or social connections, now travel the country advising other school systems how to duplicate their success. They bring videos, provide informational resources, and speak of the benefits of entrepreneurship. They offer testimonial speakers like Matte Hynek, the first female machinist in Cardinal High School history. She tells listeners that she expects to spend five years in the industry. “Then I may become a teacher myself,” she says. “I want to help people realize that this is a growing and profitable business. Anyone can do it. It can be done anywhere. We need people. We’re short on people. It’s just a matter of teaching them and encouraging them.”

The Cardinal Manufacturing program is supported by a grant from the Charles Koch Foundation.