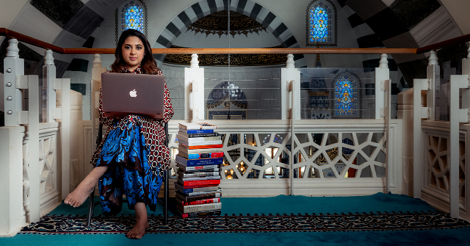 Asma Uddin is an American Muslim, and while she says she has never been subject to any overt or actionable discrimination, uneasy reactions to her faith have played as a kind of constant background noise in her life, especially after 9/11.

“I wore a head scarf for a long time,” says Uddin, a lawyer, legal scholar, and author of the upcoming book, When Islam Is Not a Religion.  “I hesitate now, because I have a daughter and fear for our safety if I wear one.” She’s cautious about displaying her religion in other ways, too. “If you’re on a plane, you don’t read or say anything with Arabic terminology. Muslim prayer can evoke anxiety.”

Uddin, 38, has long been interested in conflicts between religion and the law, specifically when the freedom to practice one’s religion bumps up against a society’s security concerns. A corporate litigator in a firm that encouraged pro bono work, she volunteered on cases like that of a Muslim policewoman in Philadelphia who was forbidden to wear a head scarf with her uniform. She lost the case—“The argument is complicated when it comes to military, police, and safety concerns, where everyone needs to look the same”—but the experience convinced her to look for a way to tackle these issues fulltime.

“No one prepares you for that moment in your life when you panic and think, ‘What am I going to do?’” she remembers about her decision to give up corporate law and focus on her passion.  She landed at the Washington, DC-based Becket Fund for Religious Liberty. “It was the only law firm in the country that focused on religious liberty from the position that religion should be something people should be able to express in the public space,” she says. “I put all my eggs in that basket, and moved my family to take a job at a third of the salary I had been making.”

As a staff attorney at the Becket Fund, she trained advocates, lawyers, judges, religious leaders, journalists, and students around the world in religious freedom law and principles. She challenged blasphemy laws in Indonesia, where the court had ruled that free speech would endanger public order, and contributed to U.S. Supreme Court victories in cases related to the Affordable Care Act. In other cases, she argued to protect the right of prison inmates to wear a beard in accordance with their faith and helped repeal Oregon’s statute banning public school teachers from wearing religious garb, whether nun’s habits or head scarves.

Government’s desire to limit free expression of religion in the name of public safety is at the center of her work now. Security fears have been invoked to justify European burqa bans as well as Indonesian blasphemy laws. ”There is a false belief that more security requires less freedom, when in fact the evidence points the other way,” she has written. In one of her U.S. cases, a community’s desire to build a mosque was challenged by arguing that Islam is a geopolitical system, not a religion worthy of protection under the Constitution.   “We have to let go of favoritism in advocating for religious liberty,” she says.  “Reconceptualization for one group will erode First Amendment protections for everyone.”

In addition to her legal work, Uddin is the founder of altMuslimah.com, “the only website wholly dedicated to stories and commentary on gender-in-Islam from the male and female, Muslim and non-Muslim perspectives.” The venture grew out of her personal struggle to discern the Islamic position on gender equality, which often differs from Muslim practice. “I realized so many other women in my community were having similar struggles about how the community interprets and applies Islam in ways women found oppressive. The night we launched the website, we got 1,000 hits right away, and from there it took off.” The site covers a wide range of topics, from parenting to health.

Uddin is a frequent speaker and panelist who teaches a seminar on Islam and religious freedom at the Antonin Scalia Law school at George Mason University and is a fellow at the UCLA Initiative on Security and Religious Freedom. But lately she has slowed down her activities to focus on her book. “This is a great opportunity for me to dive deeper into a subject that has engaged me for a long time,” she says. “The book is about how to live your faith fully, with the rights to engage in religious exercise without inappropriate government interference. My religion is very central to who I am, and it is for other people, too. Why should that be shut out of the public space?”

Asma T. Uddin is senior scholar at the Religious Freedom Center of the Freedom Forum Institute.